For a long time I was more reader than writer. My own writing was limited to rambling diary entries, and poems of the moment, and half-fledged short stories. Then I discovered the satisfaction of writing big wild stories that have to be imagined in 3-D with characters moving like talking pieces around a chess board. And over time a pattern emerged – it seemed that the stories that were hidden deep within me, demanding to be told, usually involved some dark romance and sex and death and a mystery of some kind. I discovered that the resolution to a suspense novel can go either way.

So in a kind of reverse-fit fashion I’ve realised there is a kind of book that means more to me than other kinds of books; it is the one that has the capacity to haunt my heart forever.

They are novels written by writers who are prepared to go beyond the normal, to name what cannot be named, to ferociously unmask vulnerability and obsession, to explore parallel dimensions that hide deadly secrets, beneath and beyond what can be seen and spoken about. The books I’d save from the blistering heat of my domestic inferno are unsettling, ambitious, dramatic novels with flawed, fearless, unforgettable characters who sometimes act outrageously as they throw themselves into the act of being alive.

The inimitable Atwood is master of the art of  genre-bending suspense fiction. She has been my most influential teacher and we have never even met. It is the novel that broke the shackles of middle class education and set me free to wreak havoc with my imagination. It is the novel that sat on my desk while I struggled to put into words a story that was beyond my writing talents. To write Paola Dante’s story I had to dive into a well and learn to swim. And whenever I faltered I’d read a few pages of The Blind Assassin and the perfect intriguing haunting essence of it would enchant me again and I’d want to emulate that. Since i’m being fair and just I’ve listed the books in order of Author’s surname and so it’s ended up top of the list, but it’s probably the first book I’d grab anyway.

2. Milan Kundera’s The Unbearable Lightness of Being.

This dark and brilliant novel has one of the best titles ever devised by a writer. Tomas and Tereza with their odd happiness and odd sadness always seem more alive than most real people I know.

3. Gabriel Garcia Marquez’s Love in the Time of Cholera.

An unusual love story with two older protagonists that fed into a curious realisation; fiction reminds us that life is long and strange. And interwoven into this fantastical revelation is the notion of love’s durability; the idea that beyond all the contretemps, diversions, catastrophes, sagas of fortune and misfortune, that life (or fiction)  throws at star struck lovers, there is always a chance that the perfect marriage of minds and bodies that has been delayed, paused, postponed, relegated to the ash pile of lost and forgotten things, may after all happen.

4. Susanna Moore’s In The Cut

A deeply disturbing, harrowing story that moves between Italy and Bosnia, between past and present,  about a passionate and imperfect romantic love, marred by war and the obsessive maternal desire to have a child, about obsession that crosses all  boundaries. The tragic events unfold with a ferocious intensity that makes it feel as if one’s heart is being ripped out by talons.

Morrison’s heart-stopping slavery saga revealed to me that it was possible to write about ghosts in a way that would break your reader’s heart – and that the immense power of fiction made this true even if the ghost was a house.

Ondaatje’s novel about a tragic, obsessive love affair is a beautiful, spare narrative with riveting language. It captures a world scarred by war, both inside the villa and in the desert, enacting history in a way that is raw and physical and at the same time imaginative and graceful.

Rushdie’s reputation was so immense and so impregnable that I hadn’t dared to read him before, and political novels are something I generally avoid, but at the right moment in the right setting this brilliant novel engrossed me and surprised me and then overwhelmed me with its endearing characters engaged in fantastic endeavours to find their voice and identity. I have been a Rushdie fan ever since but it is the first and so holds a special position on my bookshelf.

9. Susan Fromberg Schaeffer’s The Madness of a Seduced Woman

This astonishing book about love, infatuation, and betrayal, was given to me after I borrowed it and expressed my huge admiration so it’s a late arrival on my bookshelf. It’s a feminist novel of the best kind, about the vulnerability that goes with being a woman but also about taking responsibility for one’s actions. The main character Agnes commits a horrific crime of passion and is punished by society for her actions. I’m not sure exactly how Schaeffer  moved me so much with this intricate, complex story but it has something to do with an unflinching eye combined with beautiful language and an extraordinary portrayal of Agnes that I found myself identifying with. Another great title!

I would grab my iPhone which has given me endless hours of listening pleasure with the audible.com app. The book that I would listen to as I huddled on the verge watching my house burn down would be one of the most extraordinary, otherworldly, captivating novels I’ve ever connected with: 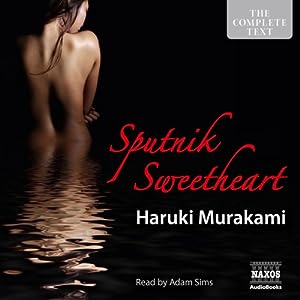 When you’ve had a love affair going with a favourite author, and you have ravenously devoured every surreal, bizarre story he comes up with, then you are surprised by a book that touches you on the inside, in  private places you didn’t know existed, in a way you can’t actually explain except to say that it is as if your skin has new sensitivity, as if it fits you as snug and close as it did before but now you are like the woman suspended over the fairground for a whole night waiting to be let down, with the other aspect of herself sitting in a city flat engaged in a risqué relationship; if a book hits you like that then you feel honoured to be human, honoured to be in the company of a magician who can manipulate reality and fantasy so that there is no difference, so that each is the underworld of the other.