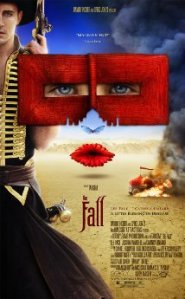 The Fall, with Catinca Untaru

The Fall by Indian movie director Tarsem Singh is one of those big-screen wonders that catapulted me into unexpected wonder. Its swashbuckling premise is that if you can trust in a paradigm where reality and fantasy are allies then anything can happen and brave little girls get to be Zorro.

The heroine Alexandria, a small girl who befriends a fallen stuntman (fallen in both the ways of movie horses that gallop away instead of standing still for an important second when the stunt actor is jumping off a railway bridge onto their back, and in the way of the hopeless romantic adulation of beautiful women who love the things money can buy and are hence shamelessly loose with their affections) is played by Rumanian child actress Catinca Untaru who is not only ferociously talented but utterly convincingly charming as she slips between reality and fantasy with the easy agility of an old pro (think Meryl Streep 10 years old).

Suffice it to say that I deeply, jealously, wished that I had invented her before they did. I resented that director and his whole film crew for having discovered this amazing child before I could breathe her form onto the page. As entertaining as the film was I considered Alexandria (or was it Catinca?) ill-used.

In my novel, the one I might have produced if someone else hadn’t dared to pluck her out of the ether, she would have reached full potential as a fully rounded character. This is the deceit of every writer – we believe that we can invent a world entirely from scratch and people it with such original, such charming, such fully breathing characters that we can trick our dear readers into not only suspending disbelief but believing this is a scene of reality that has never happened in life.

Catinca became the first Rumanian child to star in an international movie, winning the role from hundreds of hopeful child stars, after learning english in her native Bucharest from the age of four (indeed showing such an aptitude for it that she could do various accents). Catinca’s agent Andreea Tanasescu convinced Tarsem Singh to let her audition and she was apparently so good at slipping between fantasy and reality at the audition that the director adjusted all his ideas of who should play the role and selected her.

Her mother said that Catinca returned to being Catinca, leaving Alexandria behind on the film set, as soon as she arrived back in the hotel room. But I cannot help thinking that only Catinca could have created Alexandria, and in that sense her imagined interpreted Alexandria is quite singular and unique, a fruit picker’s daughter in 1920’s Los Angeles who exists as an avatar of Catinca Untary. Out of a movie called The Fall, has come a personality that DID NOT EXIST BEFORE.

It is possible, that’s all I’m saying.

P.S. I discover only today that Catinca Untaru nearly missed her plane to the film shoot because of difficulties getting a visa for South Africa (my home country) where The Fall was being filmed. I regard this as a strange coincidence. And so it is that the imagination, a rubber elastic band with its own tension, bounds back and forth between reality and fantasy with remarkable pliability.