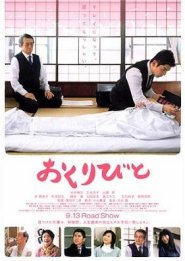 Departures is the cool name of an astonishingly beautiful Japanese movie (academy award for best foreign-language film) about an out-of-work cellist who ends up working in a funeral home by mistake and proves to have a calling. It makes one think of a Departures lounge at an airport – as if we’re all just in transit from here to somewhere. In the movie the father bequeathes the wonderful idea of stone letters to his young son; he disappears out of the boy’s life but the quaint story remains behind.

I experienced the pang of writer’s envy – what a fantastic idea… wrapping the fingers of the mother of your unborn child around a stone you have selected… a simple powerful image to weave past and present together, as well as make the emotional high point (see the movie!) –  a potentially corny moment – totally believeable.

In The Good Cemetery Guide the only thing Anthony Loxton’s father left him was the ability to speak to the dead; imagination and a reaching out for grace was not permitted; so Anthony unloaded onto a Mexican puppet and dreamt of Mexico which was as far away from Kalk Bay as any place he knew. Being the kind of person who picks up random stones and rocks everywhere she goes the delightful idea of the look and feel of a stone evoking unspoken thoughts and emotions – a wordless letter – resonates with me in a big way.

One can almost hear the beating heart of a stone as it rests quietly in one’s hand; it’s

sometimes warm and sometimes cold but always oddly mystical, this nugget of rock created by cosmic activity and ancient weather patterns. Hence the borrowed category title: Stone Letters. The entire significance always seems to escape one: the felt whole is always greater than the sum of words written on the page. Maybe stone letters will work better…

It turns out that the movie is loosely based on Coffinman: The Memoir of a Buddhist Mortician, by Shinmon Aoki.