Oops! Deleted my spam file without thinking and lost bald-head’s comment on the graves gardener blog. Basically telling me off for being spineless: come on (!) why don’t you tell everyone what you really think? I guess that’s blog protocol. Tell it like it is, get it out there, spill your guts, take sides, be up-front, controversy and confrontation is good, get naked, decide if you’re a lover or a hater. Life is essentially humdrum and boring so use your opportunity to liven it up.

This is where I point out that I’m a fiction writer experimenting with a new medium, not an amateur journalist or social commentator. Fiction writers  are often fence-sitters; even famous ones admit to it happily in interviews. They’re born to dwell on moral conundrums, painstakingly seeing every perspective, lovingly walking in a character’s shoes until it’s almost clear to everybody concerned what drives this imitation of a human being to behave the way they do.

I’m a life-long eclectic by choice. But in the midst of all of that truth is another truth; my personal truth that I’m still trying to figure out.

So here goes, for what it’s worth I find cemeteries claustrophobic, I’d want my minimised earthly remains (ashes) to be spilled from a mountain top over some endless wild expanse. Low-impact and clean. But… what if some dearly beloved family member or good friend died tragically in the line of duty on a foreign battle-field? Neither option seems optimal to me; not the pretty english flowers or the stark german simplicity.

So the provocation pushes me to realise two things: firstly, like Anthony Loxton in my novel THE GOOD CEMETERY GUIDE I prefer some wildness in the mix, a fenceless park-like area where visitors might wander in peace and privacy, a place of natural beauty with running streams and huge harbouring trees (Ah, but trees bring leaves and work…!) and secondly, that perhaps my gut response has something to do with the fact that I’m neither english nor german but afro-european.

The financial burden of running the war graveyards should not only be part of a  national dialogue between government, the military, survivors and the rest of the population, it should be part of dinner conversations conducted with much gusto and opinionated banter.

Of course I have an opinion but it’s dull to me; using the imagination to explore other people’s motives is a far more satisfying activity.  So how to keep faith with the characters who arrive out of the dark wanting me to tell their tale impartially, warts and all? I’ll just don my wizard’s hat and wander away from real-life blogs and I’ll soon be back in their zone.

Departures is the cool name of an astonishingly beautiful Japanese movie (academy award for best foreign-language film) about an out-of-work cellist who ends up working in a funeral home by mistake and proves to have a calling. It makes one think of a Departures lounge at an airport – as if we’re all just in transit from here to somewhere. In the movie the father bequeathes the wonderful idea of stone letters to his young son; he disappears out of the boy’s life but the quaint story remains behind.

I experienced the pang of writer’s envy – what a fantastic idea… wrapping the fingers of the mother of your unborn child around a stone you have selected… a simple powerful image to weave past and present together, as well as make the emotional high point (see the movie!) –  a potentially corny moment – totally believeable.

In The Good Cemetery Guide the only thing Anthony Loxton’s father left him was the ability to speak to the dead; imagination and a reaching out for grace was not permitted; so Anthony unloaded onto a Mexican puppet and dreamt of Mexico which was as far away from Kalk Bay as any place he knew. Being the kind of person who picks up random stones and rocks everywhere she goes the delightful idea of the look and feel of a stone evoking unspoken thoughts and emotions – a wordless letter – resonates with me in a big way.

One can almost hear the beating heart of a stone as it rests quietly in one’s hand; it’s

sometimes warm and sometimes cold but always oddly mystical, this nugget of rock created by cosmic activity and ancient weather patterns. Hence the borrowed category title: Stone Letters. The entire significance always seems to escape one: the felt whole is always greater than the sum of words written on the page. Maybe stone letters will work better…

It turns out that the movie is loosely based on Coffinman: The Memoir of a Buddhist Mortician, by Shinmon Aoki.

On BBC tonight shocking scenes of burning cars and homes, daylight looting and rioters attacking police –  the worst riots in the UK in 30 years. Brought to mind a recent BBC insert about Jean “John” Moodie who’d spent practically his whole life (joined his dad as a 16-year old) looking after the Battle of the Somme (1916) english war graves in France.

Apparently the British have around 320 gardeners in 27 teams looking after 500 000 war cemetery headstones in France and it costs the British taxpayer a tidy sum. Years of dedicated gardening have produced meticulously tended memorial gardens. According to the about-to-retire head gardener (whose son is also a graves gardener) no flower or shrub is ever allowed to obscure a soldier’s name. In contrast the Germans have opted for a low-maintenance approach with stark plain headstones for their war dead.

All well and good, I’m with my hero in principle but looking after cemeteries is expensive and we’re living in super-difficult economic times (as today’s news clips of rioting and looting prove). The British apparently had their fair share of criticism for celebrating carnage with blooms but they forged ahead with their war gardens regardless. One has to ask though is the “Forever England” approach still appropriate nearly 100 years later? Isn’t it perhaps a tad twee for today’s tough reality of 20% unemployment amongst youth aged 16 – 24 in the UK?

Shouldn’t the British get with it like the super-practical Germans and start cutting back on expensive war cemetery gardens in faraway countries? But I know what Anthony Loxton would be thinking: imagine if we could turn all our ugly depressing cemeteries into beautiful super-safe parks in a picturesque setting where the living could conduct their recreational activities? With utmost respect, of course.

We could take the time to watch the birds around us and bees collecting the nectar of flowers and go jogging on paths next to bubbling streams, with grave headstones just a throw away, and death might not seem so terrifying, so alien, so incomprehensible, but rather part of the natural order of things.

In the case of those flowery war cemeteries in France there must be many an english soldier and survivor (and war cemetery tourist) comforted by the thought that their government honours its debts. Still, maybe an anachronism to the unemployed raging young people burning and pillaging in the UK right now.

P.S. I would have started blogging earlier if I’d known you can edit past posts. Had this idea that what’s posted is posted! Guess I was thinking of a physical mail box…

If you are talking about P.S. when used in writing, it stands for postscript, from the Latin post scriptum, meaning “written after.” It is generally used in letter-writing to indicate something added after the body of the letter was completed and signed. 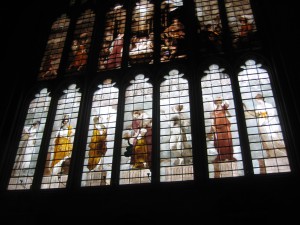 Very remiss of me but I only realised how spectacular they were when I downloaded the pics to my laptop. It’s something that I’m noticing more and more as we travel – the before (anticipation & planning) the now (tourist on holiday) and the after (memories & images months and years down the line) are so vastly different that it’s like three different viewpoints superimposed on each other, something like a 3-dimensional experience if I could only grasp it all at once.

Why is it important? Just because the images are beautiful and haunting. And because chapels like this fulfil a spiritual need that is difficult to ignore. After all, what relevance do the ancient dead have in today’s world?

A zooty digital camera/mobile phone feature would be the ability to add comments to a photograph post facto (for instance in the Oxford chapel where I took the photo), something like a customised date and location stamp that shows up (or not) on the printed image. It’s not asking a lot… If it already exists please tell me where!