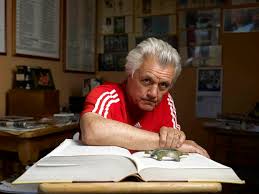 Irving’s Garp writes a novel in which the central character knifes her rapist to death in a graphic first chapter.

Garp’s publisher considers the book to be x-rated soap-opera, nevertheless the visceral language and controversial subject matter have potential market appeal so he does what he’s done before with books he’s not certain about: he asks the woman who cleans his office to read it, not expecting her to read past the first few pages.

We learn that his reputation as a publisher of surprising books destined to be popular is in fact based on the opinions of this unlikely reader who doesn’t even like books. When he realizes that she has actually read the whole book he asks her why. This is the exchange between them:

“Same reason I read anythin’ for,” Jillsy said. “To find out what happens.”
“So you read it to find out?” John Wolf said.
“There surely ain’t no other reason to read a book, is there?” Jilly Sloper said.

When she asks him for a copy he interrogates her as to why she would want to read it again, and she finally responds as follows:

“It feels so true,” she crooned, making the word true cry like a loon over a lake at night…. A book’s true when you can say, ‘Yeah! That’s how damn people behave all the time.’ Then you know it’s true,” Jillsy said.

The mind-blowing realization that hit me as I read these passages was that Irving has always clearly understood the formula for success. Writers in training tend to over-complicate the business of writing a novel and attracting readers to their work; in reality what compels a reader is what compels all of us; we all want to know what happens next to characters we care about.

And as for our own writing careers; we are after all the chief protagonist of our own life story. All novelists are waiting for their breakout novel, unless it’s been and gone, in which case they’re working on another one and waiting to find out what happens next. Top of the New York Times Bestseller List?

In my specific case I’m in the throes of tackling a second novel so I’m taking Irving’s directives to heart. Writing a second novel turns out to be a very different process to the first novel which took shape on the University of Cape Town Creative Writing Masters Program. Back then gentle suggestions and positive encouragement ensured that I reversed out of cul-de-sacs before hitting a brick wall, halted suicidal dashes down one-way highway lanes and limited how long I went round in circles before recognizing the correct exit to the desired destination. An excitable imagination was channeled.

With this second book I must find a way to ratchet the writing up to the next level while remaining true to a central plot and contending with the reality of a book marketplace teeming with original well-written books that have not broken even, never mind broken out. It’s not enough for a novel to be well received. For authors that are not yet established relatively low sales are a blow to any notion of financial survival and have the potential to plunge a writing career into a downward spiral.

As Irving points out any fiction writer worth his or her salt must work towards creating a reality that feels true and that begs the question of what ultimately happens to our characters. If we are serious about honing our craft and making a living as full-time writers then we must be serious about captivating readers. The world is full of readers; we just have to find ways of making them fall under our spell.